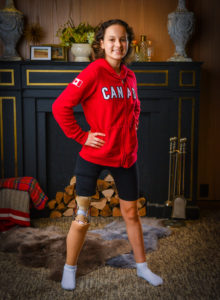 B.C. (Before Cancer), I was a competitive gymnast. I had also started dancing and had even participated in one dance
competition before everything changed.

While I was enjoying my new dance classes very much, I noticed severe pain, on and off, in my right knee. I didn’t understand why it hurt so much because I hadn’t fallen. I didn’t worry about it because as a gymnast, and a very active kid, I was used to getting aches and pains.

But then one day, I fell at home doing a very simple move I had been doing for years. I hit my knee against the floor and I was
in unbearable pain. An x-ray told us that nothing was broken. I was told to apply ice, take some Advil and avoid dance until the
swelling went down.

Three weeks later, my pediatrician viewed the results and thought they looked suspicious; perhaps a solid blood clot. He sent me to repeat the x-ray and referred me to The Hospital for Sick Children.

On March 14, 2016, we went to the 8th floor of the hospital, followed a long hallway and were in shock when we saw the words “Cancer Clinic.” That was the first moment it sunk in that something might actually be very wrong. The doctors told us they were 99% sure I had a tumour in my femur and sent me for an MRI and surgical biopsy. I was terrified; I had never had surgery before.

The tests confirmed that I had osteosarcoma, the same type of bone cancer as Terry Fox, and that it was not only in my femur, but it had also spread to my lungs.

We had a long meeting with the surgeon who outlined two options for my leg:

At the age of 12, I was given two months to decide which life-altering surgery I would have. My mom and I had many disagreements. She wanted me to save my leg, while I wanted to do the surgery that would allow me to continue to do gymnastics and dance rather than just watch from the sidelines.

On June 23, 2016, I had rotationplasty and within a few months of the amputation, I was trying on my new prosthetic leg. It wasn’t easy learning to walk again, but the motivation to do something I love helped speed up the process.

The time spent in and out of the hospital was an intense time for my family. In addition to the fear that comes with a cancer diagnosis, I had a hard time coping with being a little kid in such adult circumstances. My parents had to deal with new financial burdens. And my little sister, Lizzy, felt abandoned and thought we didn’t love her anymore.

Get answers to questions kids frequently ask about cancer

During this time, POGO was there to help us in many ways. Our POGO Interlink Nurse came to our home and talked to Lizzy to help her understand that these hard times would end and everything would be okay. She went to my school and talked to my classmates to give them guidance on how to support me without overwhelming me during this very difficult time. And when my mom gave up her job to be by my side, the POGO Financial Assistance Program helped us out.

On December 30, 2016, I completed treatment for a battle I never imagined I’d fight. The following September, I started high school and signed up for several dance classes, including ballet, jazz and even tap! I have been regaining my strength to get back on stage.

I’m so grateful to POGO donors and I hope that you feel proud to support kids like me.

In December 2017, at Emma’s regularly scheduled scans, they found that the cancer had returned in both her lungs. She had two surgeries to remove the metastasis. Emma is an active advocate in support of research for kids who fight cancer.