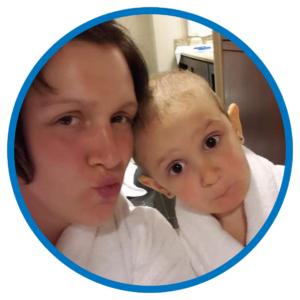 The day I took my daughter Isabelle to the hospital, I was expecting to pick up a prescription for her and make my way to daycare to pick up my twins, Nicholas and Maxime, before meeting my eldest, Zacharie, at the bus from school. But when the doctor at our local hospital asked me to take a seat, I knew we were in for a much worse scenario. He told me her red and white blood cells were low—very low. He said it was likely cancer but they didn’t know what kind. He called ahead to the hospital in Sudbury and sent me straight there.

My husband, Joel, met us at the Northeast Cancer Centre and after a few more tests, we were told they were sending Isabelle to Toronto immediately. Only one parent could accompany her on the plane so being the more experienced driver, Joel made the six-hour drive to the city. I made arrangements for my best friend and my mom to pick up and take care of the kids, and we left. I had no idea I would not return home again for another 48 days.

“The first few times Isabelle got a lumbar puncture, I couldn’t breathe. Parents are not allowed in the room during the procedure and I just stood on the other side of the door paralyzed.”

Isabelle was diagnosed with acute lymphoblastic leukemia (ALL). The doctor told us the prognosis for kids with ALL is typically very good and the survival rate is high. We were so relieved; we decided to keep our sights on the end and buckle down for a fight. But the next few weeks were hideous and challenged us all in many ways. The intravenous needle in Isabelle’s hand kept coming out in her sleep and blood would spurt everywhere. She developed high blood pressure, severe pains in her belly due to constipation from the drugs and an infection where the port was implanted to deliver her meds. Isabelle also contracted C-difficile, a bacterial infection causing diarrhea, which completely wiped her out to the point she had no muscle mass in her legs and she had to learn to walk again. But the scariest thing for us was her non-responsive episodes which lasted for several minutes each time. Tests revealed that Isabelle had developed a blood clot in her brain from the original chemotherapy and she would require blood thinners delivered by needle twice a day for over a year. Joel took a month off work, but when we could not handle that financially anymore, he returned to his job and I stayed in Toronto to care for Isabelle by myself.

What Price Do Families Pay When a Child has Cancer?

I haven’t been able to go back to work. Joel works out of town, one week on and one week off, so when he is not with us I am the one navigating this world of blood tests and chemotherapy while coordinating care for the rest of my family.

Luckily, most of Isabelle’s care takes place an hour away at the POGO Satellite Clinic at the Northeast Cancer Centre in Sudbury. This saves me the gruelling six-hour drive with a nauseous child in the back seat and means more time at home with my kids and my husband. The nurses at the clinic go above and beyond when it comes to connecting us to resources, especially when I do have to make the trip back to Toronto for aspects of Isabelle’s treatment that cannot be handled in Sudbury. Our family is incredibly grateful for the support that we have received.

Read more to learn how POGO Interlink Nurses support children with cancer and their families.

Having a child with cancer takes its toll on the other kids, the household, the marriage, but we seem to be getting back to normal lately—or at least a new normal. My beautiful little girl is four years old now. She doesn’t need to sit on my lap anymore when she gets her blood work done and loves taking the bus to school by herself. She is one tough little cookie.