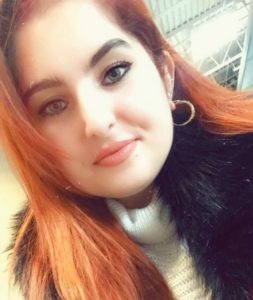 When I was a kid, my big brother was diagnosed with colon cancer and later with metastatic adenocarcinoma of the duodenum. Sadly he passed away. He was only 12 years old.

Shortly after his death, his oncologist at SickKids Hospital suggested that all of his siblings get genetic testing. That is when my family learned that I have an inherited gene mutation, which increases my risk of acquiring  malignancies and other serious health concerns. And so began my lifelong annual cancer screening.

Because of the regular screenings, they discovered my brain tumour early. At age 13, I received 33 daily radiation treatments and I was cured….per se, but I have certain side effects because of it.

This might shock you, but I am actually a four-time cancer survivor.

At age 15, I was diagnosed with cancer of my small bowel— and treated with surgery and 12 cycles of chemotherapy.

When I turned 18, I aged-out of the pediatric system. This was a very stressful time because all of the staff at SickKids Hospital are trained to take care of children, both physically and emotionally, so I felt very safe. At 18, I was still really young and didn’t feel ready to leave the children’s hospital.

My regular cancer screenings continued at Princess Margaret Hospital. At age 22, I was diagnosed and treated for colorectal cancer and a year later, breast cancer.

In addition to screening, I am monitored at the POGO AfterCare Clinic on a regular basis for late effects. Actually all survivors are monitored, not just those with a genetic mutation.  This is because even though the survival rate is up to 86%, as many as 60% of young adults will face a lifetime of complications that are a direct result of their childhood cancer or the treatment they received.

One of these complications is learning difficulties, including slowed rate of information processing, poor working memory, increased forgetfulness and more. These are all things that I struggle with on a daily basis.

I am 23 years old, and at this stage in my life, my education is my main priority, but for a while, my success at school was at risk. It was through my nurse practitioner at the AfterCare clinic that I was introduced to my POGO counsellor.

POGO’s academic and vocational counselling program is a donor-funded program that provides personalized support for childhood cancer survivors who need extra help to transition from high school on to college, university or into a vocational program.

Counsellors work one-on-one with survivors to provide them with special accommodations to complete tests and schoolwork; to help them match their career goals with their abilities; to facilitate scholarships targeted at survivors; and link survivors with the appropriate disability services and supports within colleges, universities or the community.

I am proud to say that I am now a college graduate and currently a student in York University’s Sociology and Human Rights Programs.

I recently had the opportunity to represent both the Hospital for Sick Children and POGO at the annual Cadillac Fairview Run/Walk, which raised $250,000 through sponsorship and employee participation.